Dear Lord,
sometimes it’s hard to keep trying.
It’s hard when things are tough
or when everything seems to be going wrong.
Please help us never to give up
but always to endure.
Please help us to be people who encourage others to keep trying
as we all aim for different goals in life.
Thank you that you never give up on us.
Amen

One More Step Along the World I Go What do these things have in common?

‘The greatest oak was once a little nut that held its ground.’ ‘Consider the postage stamp: its usefulness consists in the ability to stick to one thing till it gets there.’ - Josh Billings ‘It’s not that I’m so smart, it’s just that I stay with problems longer.’ - Albert Einstein

What can spiders teach us about endurance?

A spider once inspired a King to overcome defeat and endure with keeping his country free - this is the story of King Robert the Bruce and the Spider.

King Robert the Bruce and the Spider

Animation by Deborah Dey, telling the story of the spider that inspired King Robert the Bruce. ‘Let us not become weary in doing good, for at the proper time we will reap a harvest, if we do not give up.’

Alistair Brownlee Helps His Brother Over The Finish Line

The Book of Nehemiah

Nehemiah is a character in a book from the Hebrew Bible. He worked for the king in a country a long way away from his own country. The king liked him, but Nehemiah often felt homesick and wished he could go back to where he had grown up. One day, he heard that his home town, Jerusalem, was in a mess. The walls had been knocked down and many buildings were falling apart – everything needed rebuilding: people’s homes so that they had somewhere to live; the temple so that they had somewhere to go and worship God; and the walls around the city of Jerusalem so that they would be protected from their enemies. Nehemiah made a decision: he had to try to do something about rebuilding Jerusalem. 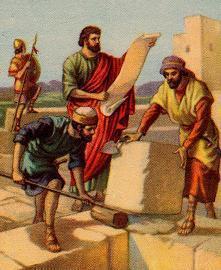 The next morning, Nehemiah went to the king and explained what he wanted to do, saying that he would need some stones and wood. The king was very understanding. He even gave Nehemiah some money to help him. Then, Nehemiah set off on the long journey home. When he got to Jerusalem, he was shocked by the mess. It was much worse than he had imagined. The walls were collapsing, buildings looked derelict and there seemed little hope that one man could achieve anything. However, Nehemiah soon found that he was not on his own. Many people were pleased to see him and offered to help. It was hard work rebuilding the walls. Some people didn’t want Jerusalem to become strong again and fought to stop the building work taking place. But Nehemiah kept encouraging the people and asking God for help.
‘Keep going!’ he said. ‘You are doing really well and I know God will help us finish the job!’
After many months of hard work, the houses, the temple and the walls were back to how they had been before. Nehemiah was grateful to everyone who had worked with him. He also knew that God had been with them and helped them, too.

Nehemiah was an outstanding figure of endurance.  What can we learn from him?

Billy Ocean - When the Going Gets Tough, the Tough Get Going

Billy Ocean's official music video for 'When The Going Gets Tough, The Tough Get Going'.

The Patience and Endurance of Job Job’s patience stands out because Job’s story is extreme in the amount of suffering he endured. Job lost all of his children and his wealth in a single day. He then was covered in painful sores, and his wife offered him no support—she encouraged him to give up, curse God, and die (Job 2:9).

When Job’s three friends came to comfort him, they could not even recognise him from a distance (Job 2:12). Adding to Job’s pain, his friends falsely accused him of wrongdoing and blamed his troubles on his unrepentant heart.

We count those blessed who endured. You have heard of the endurance of Job and have seen the outcome of the Lord's dealings, that the Lord is full of compassion and is merciful.

One of the most iconic sporting moments in history, Bannister had intended to retire after the 1952 Olympics, but, having only come in 4th in the 1500m final, hung on for another two years to make an attempt on the Holy Grail of middle distance running: the four-minute mile - an amazing feat of ENDURANCE! The South Pole had been reached by Roald Amundsen and Robert Scott in 1911/1912, so Shackleton organised a trans-Antarctic expedition to cross Antarctica from one side to the other via the South Pole. The journey included the use of a ship called the Endurance and is sometimes called the Endurance expedition, though was properly called: The Imperial Trans-Antarctic Expedition. The ship made progress though it was difficult. On the 22nd of Feb 1915, the ship became frozen solid into sea-ice just one days sail from where the ship was headed. The crew lived on the ship through the winter,  it was bitterly cold, there were 24 hours darkness.

In September 1915, however, the surrounding pack ice started to push on the ship, it creaked and groaned, floors buckled, doors no longer closed. Then the pressure was relaxed and the ship lived again, but was left tilted over at 15 degrees. In late October, the ice pressed again, this time the ship sprang a leak. On the 21st of November 1915, the broken and splintered ship sank below the ice into the Weddell Sea. There was no radio, no-one in the outside world knew what had happened, no rescue was going to come. They were on their own.

Eventually they arrived on Elephant Island. Ecstatic to be on land again after 497 days, they spent a whole day drinking water from melted snow and eating fresh seal meat until they all finally had enough, the cooks worked hard!

Shackleton decided to go back to South Georgia for rescue, it was 800 miles away, one of the stormiest times of the year and he only had an open boat that wasn't in the best condition. Ice up to 15 inches (38cm) thick formed on the boat and threatened to capsize her, it had to be chipped off by hands stiff with cold with the threat of frost bite. Sea-water came in and made everything wet, gigantic waves and storms made the men think they would never survive. After 14 days though, they landed on South Georgia, they had thought it might take them twice as long. Shackleton immediately arranged for a British whale catcher to go from South Georgia to Elephant Island and rescue the 22 men still there. It was turned back by pack ice 60 miles away. Shackleton went to find another rescue ship.

He tried a second time and a third time, always being turned back by heavy pack ice that the boats could not penetrate. Eventually a steam tug named Yelcho, loaned by the Chilean government, made it through on the fourth attempt.

Life on Elephant Island had been tough for the remaining men, they thought rescue might come in a month, it had been four months, food was short, some were ill and getting worse, living conditions were very bad and it was winter again.

But not a single life was lost and when he heard this, Shackleton said: "Thank God!"

What is love?  The Ancient Greeks talked about many kinds of love, amongst them are: The kind of love which makes us sorrowful when we hear of a crisis in another nation (or our own); that makes us give our time or money to charity; and makes us feel connected to people we don’t know simply on the basis of our shared experience as human beings. It is the love that accepts, forgives and believes for our greater good.

Storge – natural affection that flows between parents and their children, and children for their parents​​​

The love between a married couple which develops over a long period of time; the love which endures in sickness and in health. The love which makes a friend care for their former school friend who has become vulnerable in later life. Unlike the other types of love, pragma is the result of effort on both sides. It’s the love between people who’ve learned to make compromises, have demonstrated patience and tolerance to make the relationship work.

The love we give to ourselves. This is not vanity but our joy in being true to our own values. The strength to care for ourselves so that we can in turn care for others. If you do not love yourself, you cannot love anyone else either. The only way to truly be happy is to find that unconditional love for yourself. Only once you learn to love and understand yourself, will you be ready to find other kinds of love.

Philia – the shared experience of friendship

The love we feel for people we strive with to achieve a shared goal – fellow pupils, working colleagues, the players in a football or netball team, the soldiers in an army.

Our school vision is to be "loving all our neighbours" - something we do all year round, making it an enduring love.

Upholding our school vision of "loving all our neighbours".

LOVING ALL OUR NEIGHBOURS - John 15: 12 'This is My commandment, that you love one another as I have loved you.'
Top
Cookie information
Cookie Notice